You are here: Home / PROJECTS / Wait Until You See What Happened to the New Bathroom Vanity
Please Share

While staring at the 1″ beige tiles in our shower and the chipped counters while I brushed my teeth, I asked my husband to remind me how our highschool and college-age kids got new bathroom makeovers before their parents? He mentioned budgets and the smaller bathrooms were easier to DIY than a master bath. Oh yes, I do remember that conversation. So today I want to share the crazy story of what happened to the new bathroom vanity.

By the time we had the cash saved up to update the two upstairs bathrooms, the kids were on basically on their way to college.

Over the course of a year and a half, we remodeled our daughter’s (guest room) bathroom and the boys’ bathroom. The total time commitment was just under eleven months but spaced out over a year a half.

We needed that window in between the two remodels to forget we swore we would never do a DIY bathroom remodel again.

Had I known an entire bathroom remodel, including timelines and budges could be derailed by one vanity I would have stopped after the first bathroom.

The vanity was the major upgrade in our boys’ bathroom. It wasn’t like it was expensive it was just a reminder of what a difference a new vanity can make to an almost 20-year-old builder-grade dual vanity.

We were ahead of schedule when Wayfair arrived with this vanity, counter and two sinks inside one box.

The delivery crew hauled the box up four flight of stairs.

Only after the delivery crew, left did we pull the entire box off and discovered two two broken sinks and a crushed side on the vanity.

No problem, Wayfair had a concierge service to manage returns and corrections. We waited an additional three weeks for the replacement vanity.

No big deal, right? We had other functioning bathrooms.

The only hassle was we now had a 72″ vanity in this space.

A few weeks later, we cheered when the Wayfair delivery truck pulled up to the house.

This time, the first thing we did was to check the contents of the box before the crew left.

Guess what happened on this second delivery?

The sinks were a no-show. Again, no problem. I made a quick call and Wayfair overnighted the sinks.

The crew hauled the new vanity up three flights of stairs and removed the damaged vanity from the top floor. We no had a new vanity + counter and just needed the sinks. #progress

The final frontier was to move the counter from our son’s bedroom to it’s final resting spot.

This is where the project went into, “You have got to be kidding me?”.

We removed the door trim to shove, push and pray the vanity into the space. It turned out the countertop was a 1/8″ too wide on both sides.

No worries. My husband was calm and had a solution in play. He asked our son to help move the counter to the garage to make a quick cut on both sides of the counter. My husband ran down to set up the sawhorses and the wet saw to in the garage.

My son’s only job was to wait for his dad to set up the sawhorses and the wet saw.

Evan could have scrolled through his phone. He could have practiced a mountain pose.

Except, except Evan decided to help his dad and slide the countertop down four flights of stairs to the garage.

The countertop never had a chance.

The countertop hit the carpet and it was like Frosty the Snowman on the first day of winter on a snow hill. The weight of the counter was too much for one person to hold onto and it landed on the landing after a brief joy ride down the first of eight stairs.

Evan ran down to the garage to give his dad a heads up there was a slight problem with the countertop. I think he mentioned glue to his dad.

My husband ran upstairs and found the “yard sale” on the landing.

His dad told him in the big picture this was no big deal. It was a mistake and a lesson in physics.

And, we had a laugh about the glue repair suggestion.

We found a replacement counter at Home Depot. One of the things I love most about DIY projects are the teachable moments and life lessons. lessons.

Thank you for stopping by today. I would love for you to follow me on social media or sign up for my weekly newsletter for giveaways and projects here.

YOU MAY ENJOY THESE PROJECTS:

Laura Nuss is a Denver based Realtor and lifestyle blogger. She combines her love for real estate with the everyday edits that make a house a home.
And, just like her profile she is short and to the point. #snarkasm

Hi there! I am Laura the coffee-fueled creator behind Everyday Edits, a home decor blog. Everyday Edits is a creative outlet for my Realtor life & my passion to re-imagine a room or re-purpose  a Folgers red bucket.  Read more …

“As an Amazon & Reward Style Associate, I may earn a very small commission from qualifying purchases.” Click to view my full disclosure page. 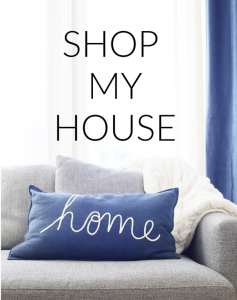 Happy Fall from Colorado! The leaves are starting

I am obsessed with this blue and orange entry tabl

I have spent more hours in this office since March

Just wait! I have a repurpose project on the blog

If you live in the Denver-metro area! The average

Shared a tip on how to paint a straight line when